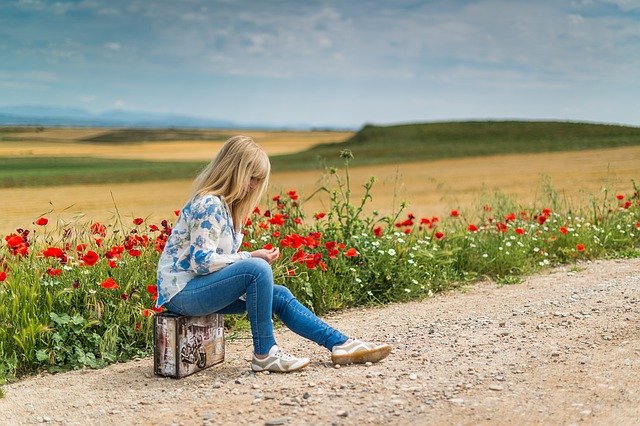 The way to become more calm and confident involves letting things go. The more we concern ourselves with an unknown future the greater the likelihood we will worry. This could become the start of the classic chain reaction: worry – which leads to anxiety – which leads to depression.
Painful Memories and Resentments

It’s reasonable to assume that you’ve been drawn to this article because something in the title struck a chord. Maybe you see yourself as nervous, or anxious? Maybe you worry or your moods get low?

However, right now, reading this article, my guess is you are fine. Your troubles, stem from your past but also concerns over the future. But right now you’re in the present and things don’t seem too bad (until maybe I just reminded you).

I began this article by mentioning the worry – anxiety – depression chain. You can, of course, get stuck anywhere along the chain, but I think you’ll recognise what I mean by this.

I won’t pretend that it’s easy to let go of the things that make you who you are but, if your life is already plagued by worry and anxiety, you must surely try. I have a few ‘let go’s’ I’d like to run past you:

That’s easy for you to say I hear you mutter?

I know, there’s nothing quite like pointing out the obvious to press buttons. But, stay with me and let’s explore these first two bullet points a little further. After all, it’s by exploring that we can sometimes unearth things that we hadn’t previously considered or come across.

Painful memories and resentments often work together and while they can certainly result from recent experiences I think we all know just how far back they can stretch.

Get resentments into perspective

Resentments are emotionally taxing, quite destructive and work against any attempt to become calm. Invariably the focus is some form of injustice or unfairness we feel burdened with, but the effect is that we are unwilling or unable to let it go. Perhaps this is due to the misjudged belief that our quest to be right will somehow culminate in a resolution of these same hurtful emotions?

Our own set of beliefs can be quite powerful, and despite the fact they are simply beliefs, we come to accept them as truths, which in turn can affect how we act. Many people with anxiety and depression experience a lot of anger and resentment, but sometimes are unable to articulate why.

It’s important to see resentments and painful memories for what they are. That is, they are in the past, and while they may be affecting you still, you cannot change the past. Resentment is a powerful emotion that leads people astray. It distorts thinking and puts a bias towards the negative which only encourages worry and anxiety.

We need therefore to turn this situation around by replacing resentment and pain with positive emotions. Next time you find yourself ruminating, don’t try to suppress your thoughts, because you’ll only find it rebounds, and you’ll ruminate even more. Allow the thoughts to arise but stand back from them as if they are nothing to do with you.

It’s like picking up a pebble. Try examining one from different angles, then when you’re done, put it back down. This approach derives from a treatment approach called acceptance and commitment therapy (ACT). The principles, as you may have guessed, are rooted in mindfulness.

Positive and negative feelings influence us in very different ways, but curiously, negative feelings can feel like an asset, so we need to be aware of this. For example it’s easier to be critical, to spot mistakes, to become more focused and more detailed when negative feelings dominate, but the keyword here is negative.

Positive feelings are altogether different. They help us to feel expansive, to come up with new ideas and possibilities and to consider opportunities rather than problems. So how do we go about moving from one state of affairs to another?

Worry and anxiety tend to come with something of a fixed mindset. You must believe you have it within you to change or your stubbornness, your fixed mindset, will prevent you from achieving your goals and being calm.

Psychologist Carol S. Dweck maintains that people with a fixed mindset are overly focused on performance goals and avoiding failure. When they achieve these goals they feel validated but can still feel anxious because it means they have to work as hard or harder to maintain the status quo. When these often self-imposed standards can’t be met the person feels hopeless and helpless.

Dweck contrasts this with a growth mindset in which the person remains open to new ideas, is willing to take a risk on trying something new and doesn’t get hung up on issues like winning or losing, or passing or failing.

One thing we can say about fixed mindset folk is they tend to be persistent. When confronted by a problem they typically keep repeating the same behaviour yet hope for a different outcome. They resist trying new ideas and as a result all the negative emotions they carry just follow them around.

In case you’re wondering about your own mindset bias, you try our test your mindset quiz.

One of the techniques Dweck uses to shift the bias towards a growth mindset is to teach people about brain function. We all know we have at least the potential to change and the same is true of our brains. Using our mind to change our brain isn’t far fetched and there are plenty of examples to prove the point.

Let’s imagine you’re a brain – indulge me for a moment. As you go about your business a worry comes your way, so you fire up a few neurons to respond. But this and other worries go on and on so you think, hang on, this must be really important, I’d better commit more resources to it, and so you fire up a few more neurons and you start to make more robust and stable connections. Before too long you’ve established a nice neural structure for worry.

Okay, you can stop being a brain now.

As Canadian psychologist Donald Olding Hebb once put it, “neurons that fire together, wire together” and this tells us something about how we can exert a positive influence over our own brains.

Carol Dweck uses this neuroscience knowledge in order to teach people to learn or practice something new in order to develop their brain in new directions.

There’s nothing complicated about it, but it does require you to acknowledge your mindset may have blocked you from getting what you want or where you want to be.

The next step is thinking what you could do differently in order to achieve these goals rather than repeating the same things over and over and getting nowhere.

Fixed mindsets sound more concrete than they actually are. The fact is the brain is like any other muscle and the more you use it and test it and try new things out the better it will perform.

The neuropsychologist Dr. Rick Hanson says that people who routinely relax have improved gene expression that helps calm stress reactions. Mindful activity boosts left prefrontal cortex activity, which helps to suppress negative emotions and reduces activation of the amygdala, what Hanson refers to as the “alarm bell of the brain”.

I’ve discussed the brain but in any attempt to beat anxiety it is worth knowing that some genes are like switches; we can in fact switch them on and off.

Unfortunately our full understanding of genes in relation to anxiety remains a bit sketchy so the production of a tablet to target and switch off the excesses of anxiety has a few years to go.

Anxiety, depression and other mood disorders are known to have a genetic component. Various proteins surround and stick to DNA and part of the role of these proteins and chemicals is to switch genes on and off.

Factors such as diet are known to have a significant role in switching genes on or off. The implication for anyone with a genetic predisposition towards anxiety and depression is that by balancing environmental influences, like diet and other lifestyle issues, protective genes can be switched on while others can be switched off.

Of course if it was down to switching to salads, rice and pulses and getting out the rowing machine everyone’s troubles would quickly dissipate. Even so, it does rather depend on the depth of the problem. You may find you can achieve complete relief by making changes to your diet and lifestyle whilst or you may feel just a little better.

Some of the more obvious reasons relate to whether you are male or female. Women, for example, have the burden of having naturally higher levels of stress hormones, while testosterone in men appears to protect against stress.

Early life experiences also appear to have significant effects on the sympathetic nervous system that can affect levels of sensitivity in later life and for the whole of life. We are unable to reverse-engineer our early life experiences, but to be confident in yourself, it’s important to recognise that you have it within your gift to modify their effects.

Our bodies don’t discriminate between physical and psychological stress. Stress hormones are as likely to be produced in response to thirst, food additives, caffeine and viral infections as they are to negative emotions.

Likewise, a noisy, hot, polluted environment feeds the stress response.  Even mild dehydration can affect mood, so drink plenty of water during the day. Alcohol, recreational drugs, and cigarettes, all have negative effects although at the time they may feel as though they are alleviating anxiety or low moods.

Let’s now consider an aspect of the human condition that enables us to come back from adversity, grow stronger from negative experiences and which prepares us to cope with unforeseen challenges. We call it resilience.

Thomas Edison once said, ‘I haven’t failed. I have identified 10,000 ways this doesn’t work.’ You may consider resilience as one of those character traits certain lucky people are born with, but I’m here to tell you that resilience is a skill that we can all learn and profit from. With greater resilience comes:

Okay, you want some of this resilience stuff, but let me remind you that you’ve already got some reserves. Like all of us, you must have experienced setbacks and challenges and yet here you are. My point is that resilience isn’t about being Teflon-coated and neither is it about happiness, although that may be a useful spin-off. It’s really about coping, but sometimes with different and more adaptive ways than you might be used to.

The way you go about developing resilience is actually a very personal thing. I can offer a few suggestions but what might work for me may mean nothing to you.

How to think big and succeed
Be more daring, there’s nothing to lose
How not to waste your life