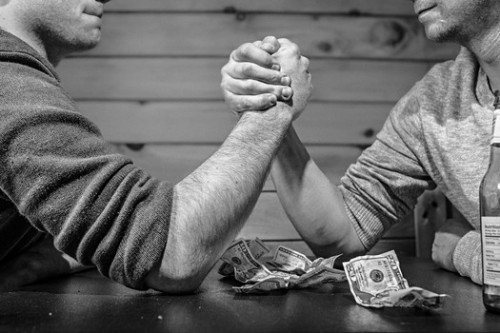 Assertiveness is about standing up for our own rights while at the same time not trampling on the rights of others.  If we fail to stand up for our own rights there are plenty of circumstances where people will ignore us. Assertiveness is not aggression. can sometimes get us what we want but it is more likely to come at a cost. Aggression almost inevitably means violating the interests of others in the cause of self-interest.

The list is potentially endless but here are just a few examples to measure your assertiveness against. Would you be prepared to:

– Go next door and ask them to turn their music down?
– Tell a waiter your meal is unsatisfactory?
– Return an item to a shop and ask for a refund?
– Admit you made a mistake?
– Confess that you’ve forgotten someone’s name?
– Ask someone in your booked seat to remove themselves?

A lot of people have fewer problems asserting themselves on behalf of others than they do for themselves. This is partly because assertive behaviour is closely allied to our self-image. Those with the most positive self-image tend to have the least difficulty with asserting themselves on their own behalf. Self-image is about how we see ourselves and the great advantage of learning a few assertiveness skills and putting them into practise is that it boosts both self-image and confidence.

A great deal depends on your view of assertiveness. You can be quite mild mannered and softly spoken yet still be an assertive and effective person. Assertiveness isn’t about having a razor sharp wit, or having physical presence, it’s about being you with a few extra skills added to your repertoire.

Not being assertive leaves you vulnerable to the whims of others. At worst you become a victim of bullying. Not only will your own self-respect become eroded but others around you will have concerns over your dependability and reliability. It does nothing but harm to your emotional state. Some bottle up resentments and explode in a fit of anger. Some resort to passive-aggressiveness and some simply turn their frustrations, fear, anger and resentment inwards and become depressed. You may not get everything you want by being assertive but that’s not what it’s about. Assertiveness is holding the middle ground between aggression and non-assertion. It is quite simply the best of these two extremes and the best for your health and wellbeing.

When is Assertion Most Difficult?

We all use some measure of assertion without realising it. It really only comes to the front of our minds in situations that are difficult for us as individuals. The trick therefore is to stand up for our rights in circumstances we find hardest.

Imagine a situation where someone keeps

talking over you in order to get the bosses attention. Do you politely sit back and allow them to dominate or do you interject? If you’re halfway through a sentence there’s certainly no harm in saying, ‘I know we’ve all got something to contribute but I’d like to finish what I’m saying.’ You may have to raise your voice but only do this enough to be heard. Don’t ever shout as this will come over as anger and anger signals you’ve lost control.

In groups of people it can require a little persistence in order to get your point across. A simple technique known as ‘broken record’ is often useful. Broken record is simply a case of repeating your message until it becomes clear that it has been acknowledged. But there are pros and cons here. If you maintain your message you are essentially forcing people to pay attention. This may be merited in some but not all circumstances. Forcing people to pay attention can sometimes backfire and others may become more stubborn and refuse to give way. To use the broken record effectively it’s often helpful to show empathy with other views being expressed in the room.

Sometimes assertion is needed when we are simply unclear about another person’s motives or why they behave the way they do. The poorest response to perceived unfair on unreasonable behaviour is to moan about someone behind their back or sit on the problem with simmering resentment. Fear of approaching someone directly is usually based on some assumption about the negative consequences for ourselves. Assertiveness however, at least in this example, is simply about seeking clarification. The purpose of your question is to convey interest rather than any aggressive agenda. ‘Why did you do that?’ It’s a simple question but it can be asked in a challenging or inquisitive way. Positive assertion will opt for the inquisitive option. That way you’ll hopefully collect the information you need and the person you ask won’t perceive you as a threat. Assertiveness doesn’t necessarily equate with getting what you want.

It’s a useful tool that can be applied in a variety of circumstances but it doesn’t guarantee behaviour change or a lack of frustration on your own part. Failing to get a change in someone’s behaviour may lead you to making a decision that is essentially something of a last resort. ‘If you continue with this the consequences for all of us, you included, are . . .’ This spells out the negative consequences of a decision in no uncertain terms. If it becomes clear that behaviour still won’t change your next recourse depends upon the situation. In a work setting, for example, you may decide to say you’ve been left with no option but to report/complain about the behaviour to a higher manager. It is a call only you can make but it impresses on the person that you feel so strongly about the issue that you mean business. To take the edge off aggression it’s also important to offer a way out, perhaps via some kind of compromise.

There are usually differences in what might be regarded as the currency of assertion in your private life as opposed to your work life. The most you can probably expect in your private life is that your value as an individual is being acknowledged and that your feelings are being properly considered. At work your feelings come much further down the pecking order of priorities. Work is usually about accuracy and implications. Confidence and assertion come as something of a package but confidence can be regarded as arrogance if it isn’t moderated by some degree of empathy as to the effects decision making or other actions are having on other people.

Previously, I mentioned that a simple phrase can be verbalised in such a way as to convey entirely different messages, depending on the tone it is conveyed. Assertive messages depend upon removing potential distractions such as blame, threat or accusation. An assertive message requires you to use a steady voice and it can sometimes help to set the scene by weighting your voice with a slow opener such as, ‘Y-e-s, that’s certainly one perspective’. This acts as an indicator of your thoughtfulness and prepares the way for you to express your opinion.

We’re all entitled to our own opinions but in terms of assertiveness the way an opinion is pitched is important. Some opinions serve to make a statement and shut others down. ‘Rubbish,’ or, ‘you must be joking’, are two examples. Over forceful or dogmatic opinions are invariably hostile. Sighing, tutting and rolling of eyes are all signs of passive-aggression, and saying nothing at all is the ultimate in non-assertion. In between these extremes is assertive opinion making. How do we recognise this for what it is?

Obviously anyone with opinions and a sense of self regard will feel there are times they simply can’t budge. Many of us have our ‘line in the sand’ which we won’t cross. Fortunately most people accept that compromise is a fact of life. Difficulties emerge with people who seem unable or unwilling to accept compromise. The danger for these people is they are seen as rigid and this can lead to them becoming more isolated and cut out of decision making.

Download our free eBook on Positive Assertion for more insights, tips and exercises.