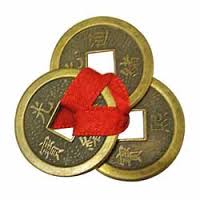 Resembling hats, these gold ingots are placed in strategic places of the home in order to bring luck and financial good fortune.

In order to stimulate positive energy and attract wealth coins are clustered in batches of three or six and tied with a red ribbon. There’s just one condition. Coins must come from a positive dynasty such as Ch’ing. Ming or Sui dynasties would certainly invite negative energies.

Many people confuse these stylised dogs with lions. In fact they were often carved as very large objects in order frighten would-be thieves. You’ll still see them guarding historic wealthy properties and palaces.

The dragon turtle has the head of a dragon and the body of a turtle. The mouth is always open so it can exhale great positive energy. Place a coin in it’s mouth to attract wealth and success but make sure the coin is face-side up!

You’ll see these little critters in many homes. Like the dragon turtle many people like to place coins in the mouth as they attract wealth.

Another wealth and success symbol but you have to get the numbers right. In this case it’s eight red and one black or vice versa.

Some of us in the West go for lucky socks or a teddy bear. The Chinese are more likely to turn to sacred animals such as the ox. Place the ox symbol where you need a luck boost. A job application or exam revision notes are just two suggestions.

Shaped into a figure of 8 the mystic knot is a series of six knots usually crafted from red silk. The knot is often attached to another symbol (coins for example) in order to boost the chances of a specific wish.